Jack E. Dorsey of Camano Island, Northwest Fine Artist
Camano Island, WA
Welcome and thank you for entering my realm of inspiration where you may get acquainted with me and my art, whether it be watercolors, oils, acrylics, egg tempera or sculptures, I hope you are challenged and inspired. 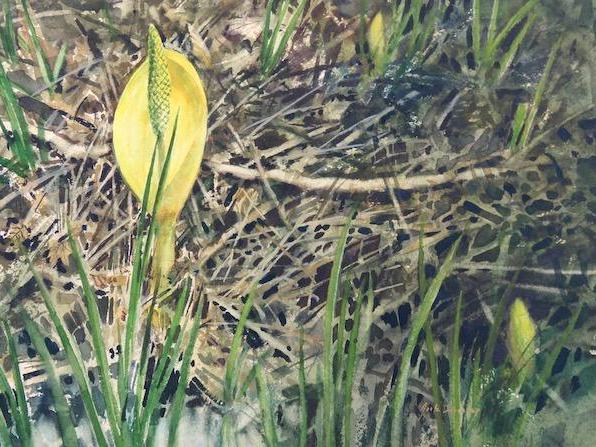 Jack Dorsey is a lifelong resident of Washington State and is a graduate of Seattle Pacific College. He has to his credit two one-man shows at the Frye Art Museum in Seattle and a one-man show in Tokyo, Japan. Jack Dorsey's art has been collected by the Frye Art Museum and the LaConner Historical Museum along with numerous corporations and private collectors throughout the U.S.A. and internationally. Jack Dorsey is a former president of the Northwest Watercolor Society and a past member of the Puget Sound Group of Painters. Currently he is a life member of the Northwest Watercolor Society and an associate member of Oil Painters of North America. Jack Dorsey's emergence back into the art world came in 1997 after retirement from the Boeing Company...

Early Bloom
Hellebore area precursor to Spring and walking to my studio they nestle next to our home.

2017 Mother's Day Studio Tour Encore Weekend
My family's art will be on display at Sunnyshore Studio May 20 and 21 as the encore weekend closes out a fine exhibition which features Thomas William Jones three fine watercolors. Don't miss this opportunity to see one of the Nation's premier artists work on display! Jones had the priviledge of creating the Christmas card designs for the White House when President Reagan was in office. The Dorsey family invites you to see our exhibit this coming weekend!

My art will be on display May 6,7,8,14,15 10 A.M. to 5 P.M.
Our family will be hosting a "soft opening" of Sunnyshore Studio during the Camano Island Mother's day tour. Our son, Jason Dorsey and his wife are building this amazing studio and all of us will have original art on display.