A Matter of Opinions
Mixed Media on Canvas 18 X 24 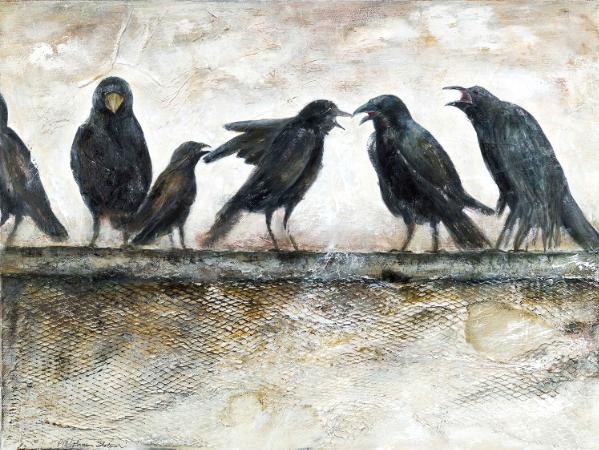 The virus pandemic brought focus on social distancing and the trauma, pain and suffering that results. We're socially distanced in so many ways beyond 6 feet of physical space and I've begun a new series to explore this. Inspired by my thorough occupation and enjoyment in painting 'Nevermore', I couldn't leave my nod to Athena (on whose helmet Nevermore perched), without exploring Greek Mythology a little further.

Remains of the
Day

Patricia Robinson Stolarski Long Grove, Illinois When I began painting, I worked often with family portraits to tell the stories of my ancestors –their beliefs, attitudes and character. I gravitated soon to more conceptual works of nature, people and just life, working primarily in acrylic and mixed media on canvas. Art for me is commenting on and trying to figure out Life. I officially launched my art career on Camano Island, WA. There, I exhibited at various opportunities locally and in Seattle, including: A Guilded Gallery (Stanwood, WA); the NWS juried ‘Waterworks’ 2009 (Bothell), and; the EAFA Open Juried 2011 and 2012 Exhibitions (Bellevue and Seattle, respectively). Now, in the NW Chicago Suburbs, as a part of the Barrington Cultural...