Ned Block - Sculptor
Seattle, WA
Working in steel and resin, the body of work represented by my sculpture often depicts the graceful, but sometimes quirky, nature of nature. 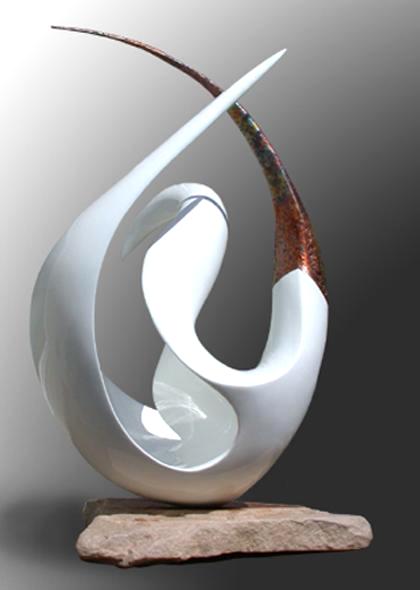 Although born in Chicago, Ned grew up in Seattle, Washington. His home was within blocks of the Seattle Art Museum and the hours he enjoyed there may have sown the seeds of a life in art. As a teen, Ned pursued his interest in art, painting in a small home studio and taking as many art courses each semester as his high school would allow. “I spent so many study halls in the art rooms that teachers stopped asking for permission slips to skip those study periods.” At the University of Washington, Ned entered the School of Art in the Industrial Design department. The curriculum called for long hours in architecture and engineering classes. “I learned a lot about structures, stresses, and processes which made it possible for me to do some of the work I do...

A VERY OPEN HOUSE...YOU'RE INVITED!
My studio and the studios of 100+ EQUINOX artists and artisans will be open Saturday, December 8, 2018 for our Annual Very Open House. While we have open houses every second Saturday evening each month, this is the BIG ONE! There's bonfires, food trucks, music (until midnight), hands on and hands off demonstrations, and good clean fun. Bring the kids, bring your spouse, bring a date, come alone...rain or shine you won't be disappointed.

It's getting to be a habit!
I have been selected to show my sculpture, Mio Amore, in the CVG (Collective Visions Gallery) Show in Bremerton, WA. The show begins January 24, 2015 and runs through the month of February. A reception and award ceremony is held at the nearby Admiral Theater on the 24th followed by a party at the gallery a block away. This is my fourth acceptance in five years. Don't ask about year three! The juror viewed over 800 pieces by 270+ artists from all over the state of Washington and chose 130 pieces to display.

METAL MERGE SHOWS SEVEN
I'm pleased that I am a part of the City of Tacoma, WA "METAL URGE" event. Seven of my sculptures have been selected by American Art Company, 1126 Broadway, to be exhibited in the gallery during their participation in the city's arts bash. The program began October 1st and runs through November 30, 2014.