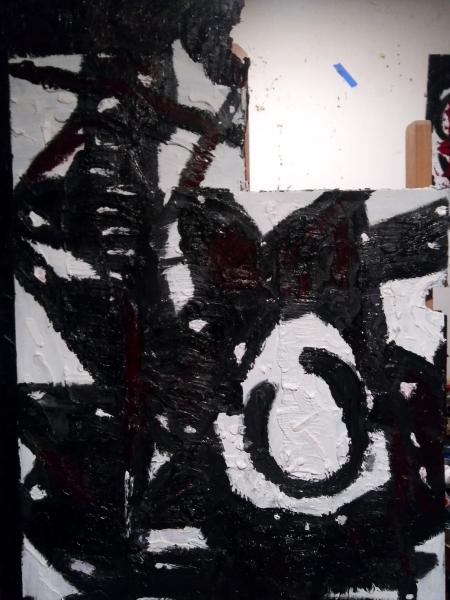 Paintings for Our Time

A Painting For
Our Time (April

Tree Waits For
Its Dreamer

Not Meant For
These Times

Ford P. R. McLain is a primitive-abstract painter living in Albany, New York. He is both a descendent of Italian immigrants and a son of the American Revolution. His influences include Paul Gauguin (his gateway painter), painters of the New York School of the 1940s and 1950s (Gorky, deKooning, Frankenthaler, Pollock, Mitchell, Kline, et al.), jazz musicians Charles Mingus and Miles Davis, playwright Sam Shepard, and filmmakers David Lynch and Stanley Kubrick. He began as a primitive painter, but in late 2013 McLain moved into abstract painting. Many of McLain’s paintings contain themes of spiritual liberation through the nexus of creativity and sexuality, as well as the connections between a painter and his muses (of which he has had a few). McLain’s...

Painter At Work
Working on the latest piece.

The next painting
The canvas frame is made from my old easel. This is 57" x 60". It should be a fun painting process.

Deconstruction/ Reconstruction
In April, I bought and assembled my new H-frame easel and put my old tripod easel in the back room. I had that easel for at least 23 years. After a couple of weeks of waiting to see if anyone wanted it, I dissembled it, sawed parts of it, and created the frame over which a new painting canvas will be stretched. So that which once held art will become a part of the art itself.

Perspective on Art
As well as I might think of my paintings, the cat merely sees a jungle gym. It is a humbling perspective.

New Easel
Surprisingly, it only took me an hour and change to put together, with minimal mistakes and even less cursing. Now I will learn to stretch my own canvases and paint bigger.