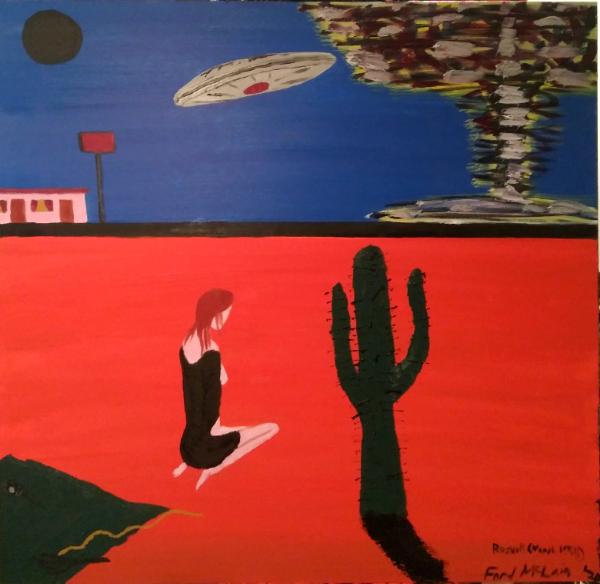 Paintings and other work inspired by my Crimson Muse.

One More Cup Of
Coffee...

Ford P. R. McLain is a primitive-abstract painter living in Albany, New York. He is both a descendent of Italian immigrants and a son of the American Revolution. His influences include Paul Gauguin (his gateway painter), painters of the New York School of the 1940s and 1950s (Gorky, deKooning, Frankenthaler, Pollock, Mitchell, Kline, et al.), jazz musicians Charles Mingus and Miles Davis, playwright Sam Shepard, and filmmakers David Lynch and Stanley Kubrick. He began as a primitive painter, but in late 2013 McLain moved into abstract painting. Many of McLain’s paintings contain themes of spiritual liberation through the nexus of creativity and sexuality, as well as the connections between a painter and his muses (of which he has had a few). McLain’s...

E-Bay
Just for kicks and to try something new, I have opened up an e-Bay account and put the painting to the right - "Planes of Existence" - in an auction.

Friday Night In The Cloister
There isn't much to do in Albany on a Friday night. The bars are closed. I don't need a coffee shop. I could read, but the mind is restless. On the left, a finished piece. On the right, a large piece in progress. In the center, an untouched, primed/unprimed wood, joint compound, and cloth canvas. Lou Reed's last Late Style work on the CD player. It's showtime, folks!

Painter At Work
Working on the latest piece.

The next painting
The canvas frame is made from my old easel. This is 57" x 60". It should be a fun painting process.