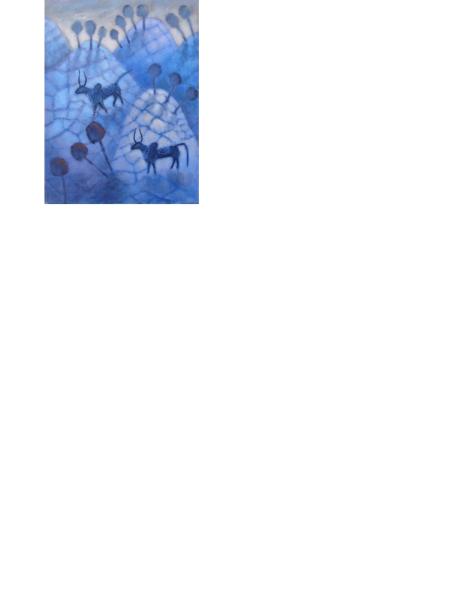 My paintings tend to take me by surprise. When they are going well, everything is satisfying and harmonious, the colours and forms seem to pick themselves. At other times it’s a battlefield. Attracted to myths and tales, I start a painting with only a loose idea of the finished work; a picture may take months (sometimes a couple of years) before it's complete. Living in many foreign places as a child, other cultures and ideas have strongly impressed me. I use painting to explore areas which I can't express verbally, and which often involve using metaphors for ideas/feelings which don't seem to be readily recognised within current society. Painting in acrylics allows inclusion of other materials, such as sand, earth, ground marble, hair, wool,...

Heads I win
I wanted to paint Judith with the head of Holofernes for some time. I became engrossed with the history behind the Book of Judith, which led to further curiosity about the Bible, Yahweh et al.

Where do the ideas come from?
The other day someone asked me how I got my ideas. This is about the creation of one painting. I don’t know if other artists go through the same process. I suppose it must depend on the subject matter, though the formal aspects (application of pigments, consideration of structure, tonal qualities etc) must be universal.