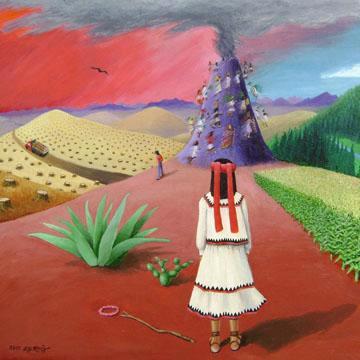 L Yvonne Ruiz - January 2010 (Updated April 2014) As a painter, I follow Dali’s artistic purpose to “make visible, the invisible”. The two-dimensional medium of painting on canvas fools our eye, and I like to explore the way it does that. Using acrylic paints I enjoy creating images that look 3-dimensional. Sometimes I sneak in an image from another dimension or use flat objects to emphasis the medium of paint on canvas, a 2-dimensional feature. I often use Mexican themes. Dia de los Muertos spirits, Aztec symbols, religious symbols, hearts, cacti, deserts, mountains, clouds, volcanos, water, fire, lizards, corn, and native people are common images within my work. In 1997 I became interested in the plight of the Tarahumaras living in the Sierras of...

2012 Zona Rosa Caffe Gallery in Pasadena, CA
October 2012 . Viviana called me "out-of-the-blue" and asked me to participate in the Dia de los Muertos exhibit at Zona Rosa Caffe in Pasadena, CA. From that exhibit I got another call to exhibit elsewhere. It seemed to lift my spirits. I'm feeling more like creating again. However I want to show more freedom in my works like Vivian's works.

2009 December, Art Park, 2nd Thursday of the Month
Along with my son, I have participated in two of the Art Park events near the corner of Main St. and 5th in Los Angeles. In April, look for my newest works at a location near the southwest corner of Spring St.